Following an exhaustive review of published molecular data and morphological characters, we propose a new generic classification for the Cyprinodontiform family Aphaniidae. The generic concept applied is based on monophyly, reasonable compactness, and morphological diagnoses. The proposed genera are monophyletic and compact groups that can be diagnosed by a combination of morphological characters.All species in Aphaniidae are morphologically homogeneous and have similar scale patterns, fin positions, and meristic characters. However, only a handful of morphological characters, including colour patterns, permit identification. We propose separation of Aphaniidae into eight monophyletic genera: Anatolichthys, Aphaniops, Aphanius, Kosswigichthys, Paraphanius, and Tellia, in addition to the new genera Esmaeilius and Apricaphanius, which are described for the species of the A. sophiae and A. iberus species groups, respectively. The original description of Aphanius hormuzensis does not fulfil the criteria of the International Commission on Zoological Nomenclature, therefore this taxon is re-described as A. teimorii. Esmaeilius arakensis, E. kavirensis, E. mesopotamicus, and E. pluristriatus are treated as synonyms of E. sophiae. Esmaeilius farsicus is a junior synonym of E. persicus (Jenkins,

1910). The fossil genus Brachylebias is considered as incertae sedis since it lacks diagnostic characters which would permit it to be assigned to any of the extant genera recognised in this study.

Morphometric Study of the Iberian Aphanius (Actinopterygii, Cyprinodontiformes), with Description of a new Species. Folia Zoologica, 51: 74, figs. 3-4a.

The secondary freshwater fish fauna of the western-Iberian Peninsula basin is primarily restricted to local coastal streams, and man-made salt evaporation ponds, etc., which are susceptible to periodical flood and drought events. Despite its uniqueness in ecological adaptation to high saltwater tolerance, very little is known about this fauna’s population dynamics and evolutionary history. The killifish, Aphanius baeticus (Cyprinodontidae) is an endemic species restricted to river basins on Spain’s southern Atlantic coastline, considered as “Endangered.” In this study, the genetic structure, diversity and historical demography of A. baeticus were analyzed using mitochondrial (cytochrome b, N = 131) and nuclear (4 out of 19 microsatellites tested, N = 288) markers across its distribution range. The phylogenetic and networking reconstruction revealed subtle phylogeographic structuring. A scattered expansion at the beginning of the interglacial periods, coupled with posterior events of extinction and colonization caused by periodical cycles of flooding, could explain the absence of well-defined phylogenetic relationships among populations. Moreover, very low genetic diversity values and a weak population differentiation were detected. We proposed that dispersals allowed by periodic floods connecting river drainages may have promoted a wide genetic exchange among populations and could have contributed to the current genetic relatedness of these populations. 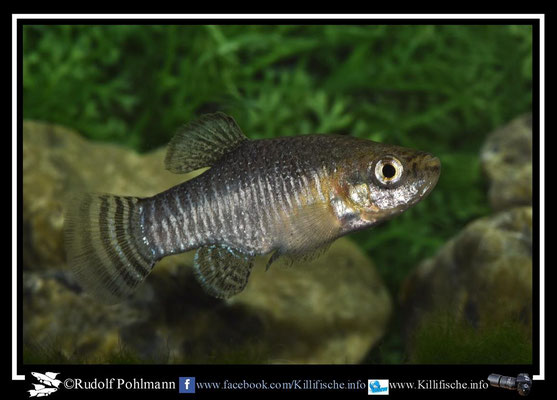 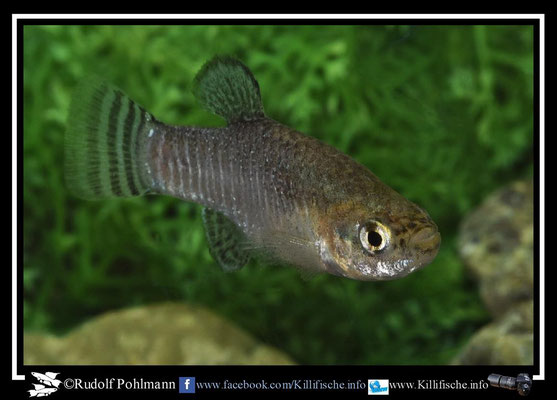 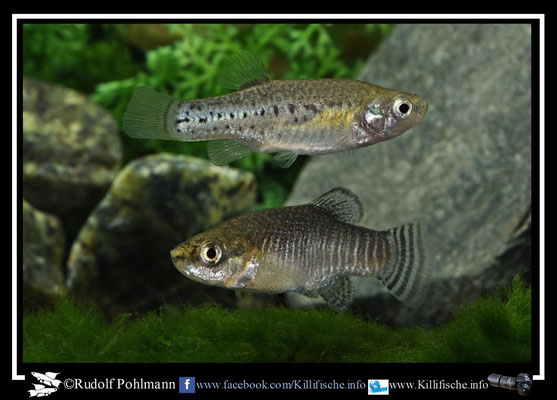 Type locality: Spain (without details) ; restricted to eastern Spain to separate it from baeticus, a cryptic species described from southwestern Spain (subseq., herein).

A new species of the genus Aphanius (Nardo, 1832) (Actinopterygii, Cyprinodontidae) from Algeria.

Abstract: A new species, Aphanius saourensis sp. nov., is described based on morphological and genetic characters. The new species comes from the Saoura Valley in northwestern Algeria. It differs from Aphanius iberus, in which the Saoura Valley populations have been included until now, by a combination of the following characters: 7–8 (9) branched rays in dorsal fin; greater preorbital length (PrOL/ED=0.9–1.3); and a narrower caudal peduncle (CPL/BLD=1.7–2.0). Body pigmentation in live males consists of a profusely mottled blue and silver pattern, without vertical bars. Females lack conspicuous black spots. The new species differs from both of its sister taxa (Aphanius iberus and A. baeticus) at 26 fixed nucleotide positions (molecular autapomorphies) in the cytochrome b gene. Genetic divergence between Aphanius iberus and Aphanius saourensis sp. nov. for the cytochrome b gene is 4.9–5.8 % and between Aphanius baeticus and Aphanius saourensis sp. nov. 6.3– 6.5 %.