Following an exhaustive review of published molecular data and morphological characters, we propose a new generic classification for the Cyprinodontiform family Aphaniidae. The generic concept applied is based on monophyly, reasonable compactness, and morphological diagnoses. The proposed genera are monophyletic and compact groups that can be diagnosed by a combination of morphological characters.All species in Aphaniidae are morphologically homogeneous and have similar scale patterns, fin positions, and meristic characters. However, only a handful of morphological characters, including colour patterns, permit identification. We propose separation of Aphaniidae into eight monophyletic genera: Anatolichthys, Aphaniops, Aphanius, Kosswigichthys, Paraphanius, and Tellia, in addition to the new genera Esmaeilius and Apricaphanius, which are described for the species of the A. sophiae and A. iberus species groups, respectively. The original description of Aphanius hormuzensis does not fulfil the criteria of the International Commission on Zoological Nomenclature, therefore this taxon is re-described as A. teimorii. Esmaeilius arakensis, E. kavirensis, E. mesopotamicus, and E. pluristriatus are treated as synonyms of E. sophiae. Esmaeilius farsicus is a junior synonym of E. persicus (Jenkins,

1910). The fossil genus Brachylebias is considered as incertae sedis since it lacks diagnostic characters which would permit it to be assigned to any of the extant genera recognised in this study.

Abstract:  Two new species of Aphanius are described from the Kol drainage in southern Iran (Aphanius darabensis n. sp.) and the endorheic Kavir Basin in northern Iran (A. kavirensis n. sp.), and compared with eight closely related species. Aphanius darabensis n. sp. is sister to A. shirini, from which it is distinguished by molecular characters (cytochrome b) and the combination of three morphological characters: 9–18 flank bars in males (vs. 7–10), females with irregular vertical patches of brown color on the flank (vs. prominent dark brown blotches of round or irregular shape), and symmetrically-shaped triangular to trapezoid otoliths with a rostrum distinctly longer than the antirostrum (vs. quadrangular to trapezoid otoliths with short and equally sized rostrum and antirostrum). Aphanius kavirensis n. sp. is closely related to a group containing A. sophiae, A. mesopotamicus and A. pluristriatus, from which it is distinguished by cytochrome b characters and the combination of three morphological characters: females with irregularly arranged large blotches of dark brown color on the flank, short pectoral fin in both sexes (13.4–18.1% SL in males, 11.2–18.3% SL in females), and asymmetrically shaped triangular to trapezoid otoliths with a pronounced predorsal region. Our tree based on the cytochrome b data demonstrates that the Iranian inland and inland-related Aphanius species (IIRAS) form a monophyletic clade with three subclades (A. vladykovi -, A. shirini -, A. sophiae subclades). The A. sophiae subclade, which is the most diverse of the three subclades, can be further divided into three lineages (A. isfahanensis -, A. farsicus -, A. sophiae lineages). The temporal diversification of the IIRAS clade is discussed and two evolutionary groups of Aphanius are depicted. Aphanius vladykovi, together with A. shirini, A. darabensis n. sp. and A. isfahanensis characterize the “old” evolutionary group. Their divergences may have happened 10–5 m.y. ago (Late Miocene–Early Pliocene). Aphanius farsicus, A. arakensis, A. sophiae, A. mesopotamicus, and A. pluristriatus, together with Aphanius kavirensis n. sp., represent the “young” evolutionary group, which developed in the Late Pleistocene (100,000–11,700 y. ago) and Early to Middle Holocene (c. 11,700–4,000 y. ago).

New species of Aphanius (Teleostei, Cyprinodontidae) from Isfahan Province of Iran and a reanalysis of other Iranian species. Copeia 2006(2):244-255.

Abstract: A new killifish species, Aphanius isfahanensis, is described from the Isfahan basin of Iran. It is distinguished from the other Iranian species of Aphanius by adult color pattern, molecular character states of mitochondrial DNA sequence data, and in multivariate morphometric and meristic space. Based on the phylogenetic analysis of molecular sequence data, the new species is hypothesized to be sister taxon to A. sophiae plus A. persicus, which also occur in Iran. 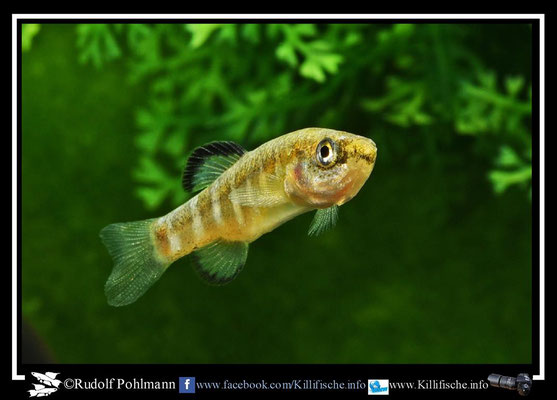 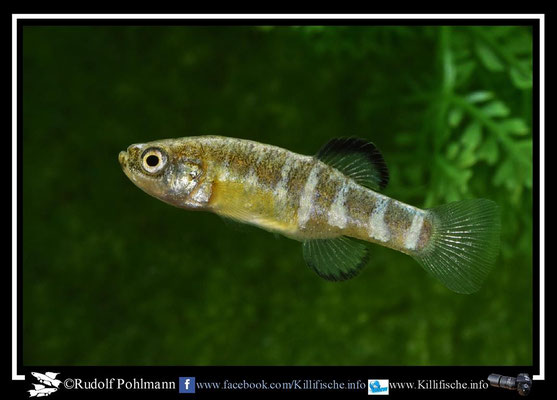 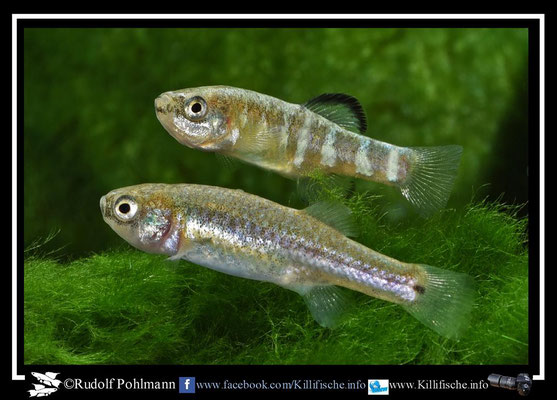 Abstract: Morphologically similar populations of Aphanius that are currently considered as A. sophiaeinhabit the endorheic Kor River Basin in the Zagros Mountains. Using genetic analysis based on mtDNA (cytochrome b), combined with examination of morphology (morphometry, meristics, otoliths), we discovered that what is thought to be A. sophiae is actually two distinct species, one of which is described as A. shirini sp. n. The males of the new species can be distinguished from those of all other Iranian inland Aphanius species by having only 7–10 clearly defined white flank bars, which is the lowest number of flank bars among the Iranian inland Aphanius species. Both males and females differ from all other Iranian inland Aphanius species by having a significantly longer caudal peduncle and a smaller dorsal fin depth. Based on the PhyML and Bayesian likelihood trees, A. shirini is sister to A. vladykovi from the Karoun Basin in the Zagros Mountains. Our results indicate that an ancient exorheic Kor River Basin existed in the Late Miocene and Pliocene. The close phylogenetic relationship between A. shirini and A. vladykovi suggests that the pre-Pliocene drainage in the ancient Kor River Basin was directed to the north-west (to the Karoun Basin), and not to the south-east as in the present-day Kor Basin. Both A. shirini and A. vladykovirepresent the highest altitude records for Aphanius. We conclude that the splits of A. shirini and A. vladykovi can be linked to tectonic events in the Middle to Late Miocene, which created the highest altitudes (>3000 m) in the Zagros Mountains, and led to isolation of populations. The present-day endorheic Kor Basin is known to have formed in the Late Pleistocene or Early Holocene, and the ‘young’ age of A. sophiae is clearly related to this history. Our results contribute to elucidate the link between geological history and the present-day species diversity in the tectonically still active Zagros Mountains of Iran.

Gonad morphology and histology of an endemic tooth-carp, Aphanius sophiae (Heckel, 1847) from Iran

This study presents the first details on morphological and histological characteristics of gonads and gonadal development stages of an endemic tooth-carp, Aphanius sophiae (Heckel, 1847) from a spring-stream system (south of Iran). The sampling was done from March 2012 to March 2013 using dip net, and a total of 226 individuals were collected. The gonads of specimens were removed, and then fixed in 10% formalin solution after checking their morphology and measuring their weights, lengths and widths. Based on the size, shape and weight of the gonads, degree of occupation of the body cavity, presence or absence of ripe oocytes or milt, diameter of the oocytes in the ovary, and histological observations, five stages of sexual maturation in females and males were determined by macroscopic and microscopic criteria. The results of the gonadal stages indicated that A. sophiae spawns at the beginning of spring.

A new species of tooth-carp, Aphanius vladykovi, is described from the Zagros Mountains of Iran. The new species is uniquely characterised by a high count of lateral line scales and by different pigmentation patterns from its closest, putative relative A. sophiae. It also possesses several meristic and morphometric differences with topotypic A. sophiae. It became separated from a common ancestor with A. sophiae by orogenic events which led to the formation of the Zagros Mountains and the isolation of the upper reaches of the Karun River basin by the development of tangs, narrow passes through the mountains with high water flow and steep gradient which prevent gene flow between lowland and mountain populations of these small fishes. 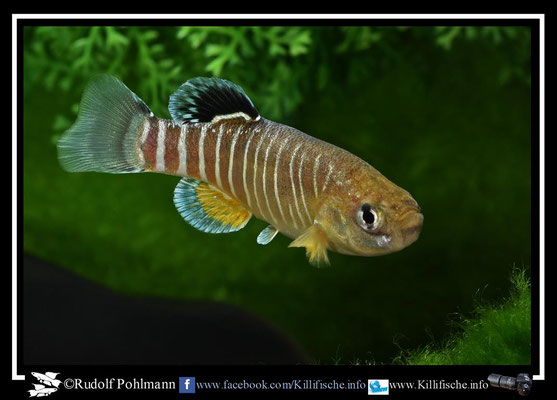 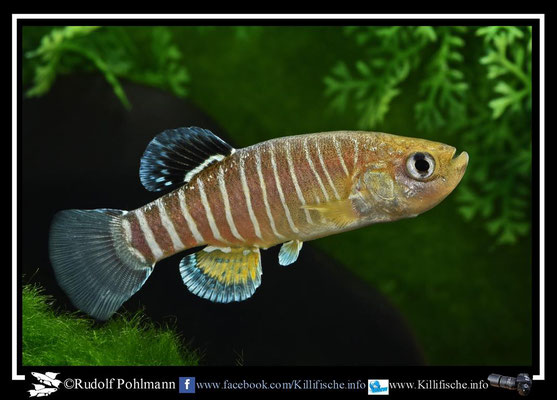 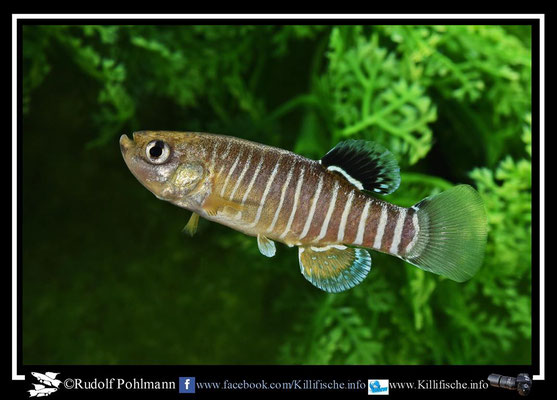