Rivulus berovidesi, a new killifish species, is described from a small stream in Sierra de Cajalbana, northwestern Cuba. It is readily distinguished from Rivulus cylindraceus Poey by the combination of an exclusive color pattern and meristic characters such as a d-type frontal scalation pattern (versus e-type pattern in Rivulus cylindraceus). The current diagnosis of Rivulus berovidesi based on chromatic, morphological and meristic characters is consistent with a recent molecular analysis of this genus in Cuba.

Type locality: near Havana in a stream which flows into Mordazo, (northern) Cuba. 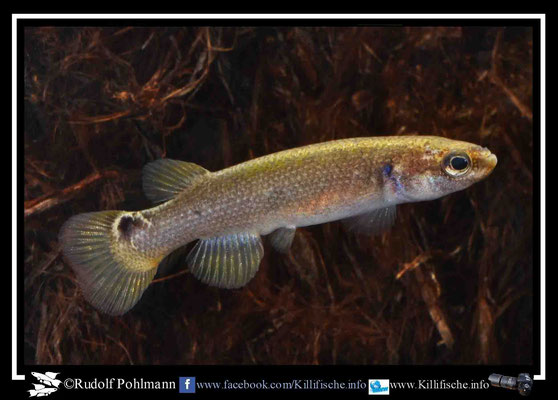 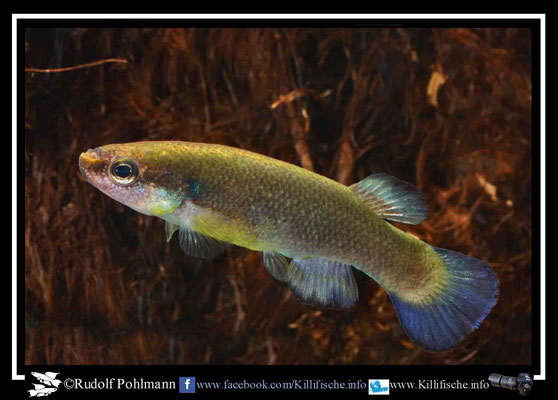 Abstract. Two new Rivulus species are described from a single locality in a stream near the village La Guadalupe, Alto Rio Negro, Guainía Dpt., South-eastern Colombia. Rivulus carolinae n. spec. differs from all congeners by combining a relatively small size, unique male color pattern and a characteristic caudal fin shape, and with a unique color pattern in females. Rivulus flammaecauda n. spec., differs by its robust size, by the presence of a unique striped and reticulated pigmentation pattern on the lateral portion of the body and a flame pattern on the caudal fin. The two new species were initially collected from a shallow, slow running, forest creek with black water. The type locality is only 2 km from that of another new species, Rivulus foliiscola, described in this same volume of Killi Data Series (Vermeulen & Mejia, 2020).

Abstract. Rivulus mejiai n. spec. is described herein based on material found at the Eastern Cordillera Andes foothills west of the town Aguazul, Casanare dpt., Colombia. Rivulus mejiai n. spec., was found in a small mountain creek, a tributary to the Unete River. The Rio Unete is one of many rivers that have their source on the Eastern slopes of the Eastern Cordillera, flowing southeasterly to join the Rio Meta and, ultimately the Rio Orinoco system. Rivulus mejiai n. spec. is the only fish species thus far collected from the type locality, a steep, cascading stream with crystal-clear water and strewn with boulders. Like other members of the "Rivulus hartii group," the new species is an excellent swimmer. Rivulus mejiai n. spec. differs from congeners by a series of interrupted horizontal red lines on its purple-blue sides; 7 or 8 of these are visible just posterior to the operculum but they gradually merge into only 3 pronounced lines on the caudal peduncle. Anal, dorsal, and caudal fin ray counts are at the high extremes for the group.

Abstract. Rivulus foliiscola, n. spec. is described from specimens collected at a single locality at the outermost southern tip of the department Guainía, Colombia, where the Rio Negro flows into Brazil, and Brazil's borders, Venezuela and Colombia meet. This locality was only about 2 km distant from one at which two other undescribed species were collected sympatrically in a shallow forest creek. Rivulus foliiscola n. spec. lives in deep pits with standing water, a habitat type supposedly more suitable for annual fishes. The new species displayed unusual behaviors, e.g., it apparently preferred to live near, and spawn upon, the substrate. Rivulus foliiscola is also divergent in coloration and fin shape from other Rivulus species and evinces a characteristic "snake-like" behavior upon capture as if seeking cover. Initially, these traits lead the authors to suspect they had collected a new annual species. However, its lifespan in captivity for more than two years, the relatively short incubation period of its embryos, and the absence of embryonic diapause strongly suggest that it is a non-annual, and thus more appropriately referred to the genus Rivulus, family Rivulidae.

Huber, J.H., Reappraisal of the Phylogeny of Rivulus and its Allied focused on External Characters. Killi‐ Data Series 2012, 9‐25, 3 figs., 2 tabs.

Abstract: In the present study all known to date phylogenetic lineages encompassing the genus Rivulus in the large sense and its relatives, 44 in total, are benchmarked against a very long list of external characters involving global and detailed morphology of each, plus some characters related to biology, behavior and ecology, plus a few characters concerning the vertebrae counts and their structure. The parsimony analysis for these 144 characters results in 3 trees only, very much in line with the global stability of major lineages and the consensus tree produces bootstrap values that are much higher than previously released studies with morphological and osteological characters. In the resulting tree, outside Kryptolebias already separated in 2004, the genus Rivulus in the large sense is shown as a monophyletic assemblage like in the molecular study by Murphy, Thomerson & Collier (1999), with annual and non‐ annual species separated, but unlike Costa (2011) who used both morpho‐osteological and molecular combined characters. Apart from the coherence of the genus Rivulus in a large sense, the analysis newly suggests the primitive position of Millerichthys, the monophyly of major annual subclades, and the phylogenetic relationship of a clade of 3 subgenera of Rivulus, namely Prorivulus, Atlantirivulus, Melanorivulus in line with a previous palaeo‐bridge hypothesis and the minor osteological diagnostic characters that were forwarded for these 3 taxa should be deepened and re‐evaluated. Two other subunits of Rivulus, namely Anablepsoides and Oditichthys, are atypically placed in the tree, but their 2 type species were not studied by Costa (2011) and that too would need re‐evaluation. Finally several phylogenetic lineages belonging to the huge ‐and very poorly known‐ Amazon basin ends up in an unstable position and more material and characters are thought necessary for further research of this very difficult group of fish.

Abstract: A maximum parsimony analysis of a combined set of mitochondrial and morphological data available in the literature for 33 rivuline taxa and three outgroups confirms Rivulus as a paraphyletic assemblage. In order to adjust a generic classification to our present phylogenetic knowledge on rivuline relationships, the following taxonomic changes are proposed: Rivulus, restricted to two species endemic to Cuba, is hypothesized to be the most basal rivuline lineage, distinguished from all other non-annual rivulines by having all hypurals fused into a single plate, neural prezygapophysis of caudal vertebrae rudimentary, fourth ceratobranchial teeth absent, about 50 % of the anterior portion of the caudal fin covered by scales, four neuromasts on the anterior supraorbital series, and a black round spot with white margin on the dorsoposterior portion of the caudal peduncle in females; Anablepsoides, Atlantirivulus, Laimosemion, Melanorivulus and Cynodonichthys, previously classified as subgenera of Rivulus, are considered as valid genera; Laimosemion, including 24 species from northern South America, constitutes the sister group to a clade comprising Melanorivulus, Cynodonichthys, Anablepsoides, Atlantirivulus, and all annual rivuline genera, which is supported by a well-developed dorsal process of the urohyal and an expanded lateral articular facet of the first hypobranchial; Melanorivulus, comprising 34 species from central and northeastern South America, Cynodonichthys with 27 species from Central America and Trans-Andean South America, Anablepsoides with 42 species from northern and northeastern South America and Smaller Antilles, and Atlantirivulus, with 11 species endemic to the eastern Brazilian coastal plains are diagnosed by combinations of morphological characters, including osteology, cephalic laterosensory system and colour patterns.